1. Rotworm Queen is good boss to check by logged low-lvl character with stealth ring in boss spawn place. Boss and rotworms cannot see invisible characters. Good idea is to use mage to kill the boss immediately by wand/rod.
2. Sometimes it is possible to assume that Rotworm Queen already spawned and was killed by noticing increased number of rotworms in the cave.
3. The Sacred Casket (Book) says that the substance inside the Jewel Case (Nomad) can potentially attract these creatures, as it has already proven to attract regular Rotworms and Carrion Worms. This is a reference to the Dune series of books wherein desert-dwelling sandworms, on which rotworms are based, are heavily attracted to melange spice. 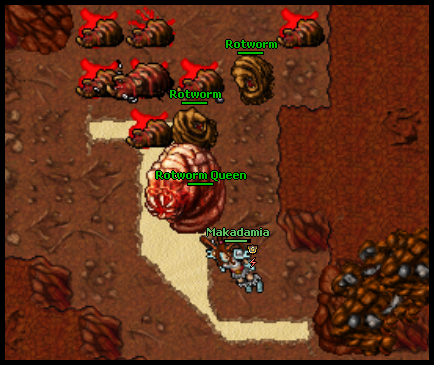