We would like to thank to everyone who decided to put effort to invent our new fansite item! Many interesting ideas, but we had to chose just three. Here are the winners!

Fansite item (once it is ingame)

Frozen Rose by Licad from Talera 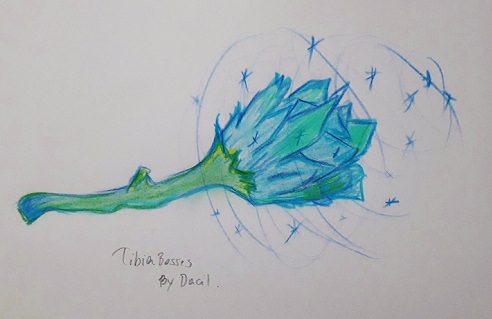 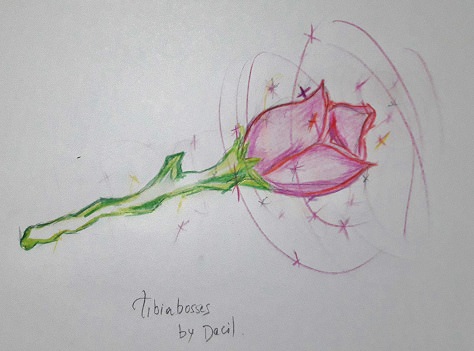 You see a Frozen Rose. It weighs 7.00 oz. The Inner feels warm there resides the heart of Crunor. Awarded by TibiaBosses.com

You see Crunor Rosenheart. It weighs 7.00 oz. It is the true and reliable heart of Crunor, it represents purity on Earth. Awarded by TibiaBosses.com

Description and story of the item:

This Frozen Rose hide inside a warm heart which can be seen only for pure and brave hearts warriors. The heart of Crunos lives inside.

Uman united himself with the earth, which we know as Tibia. And the earth bore him Crunor, the first tree. Crunor was full of charm and vitality. Also he loved his own shape and possessed the gift of modesty. Inspired by the creation he bore from itself all the plants, small and large. And they spread out on the body of mother Tibia, like a dress - it was a delight to see.

One day Crunor beginning to feels that something was growing out of him... He could not explain what it was... however, he could feel the beauty of it due to the warmth it provides. As the days passed, Crunor felt that soon he would witness the most beautiful creation that his eyes could see and that his hands could create. The day had arrived and Crunor knew it... without being able to explain it... he felt it was time, suddenly something bright began to come out from inside him... it was not big... but not very small... it was the most beautiful thing that could exist in that moment either in Tibia... finally the bright light vanished and in front of Crunor it showed up his heart, it was his heart represented in the most beautiful Rose that you can imagine... A beauty shinning and her color were as warm as Crunor's own heart. However, fear ran through Crunor... what would happen if someone stole it? His beauty was not equal to anything... and fearing this Crunor began to think what to do... where could hide it...

It was a dark night only illuminated by the light of that beautiful rose... and suddenly and although nothing seemed to foresee that such devastation would seize Crunor, a malicious group of goblins that prowled the neighborhood almost haunted by the brightness of the rose was approaching stealthily... suddenly it was gone, it had disappeared... not even its wolves could help.

It is said that Crunor can feel how part of him is frozen, and that at the same sometimes he can feel the heat of her still alive.

Details of the story can be heard by the murmurs of the ancient trees that inhabit Fae, who lament the sadness that their loss causes to Crunor. It is said that the rose fell from the pockets of one of these little bandits while they were trying to escape from a helidear snowstorm that was passing through the Southern Ice Islands while committing one of their many misdeeds.

As for the rose, fell among the snow of one of the Southern Ice Isles... half freeze and with almost nothing of its bright light... suddenly it was taken by some warm hands... but it was late its light little by little vanished... the cold covered it, but from time to time the cold ice leaves it and it shines again and show its beauty to those who protect it.

The destiny of the rose for Crunor is uncertain, nevertheless happy Yetis, a not very sight criatures… have being seeing more than before… apparently they are custoding something with ferocity... perhaps and who knows is what's Crunors has lose? 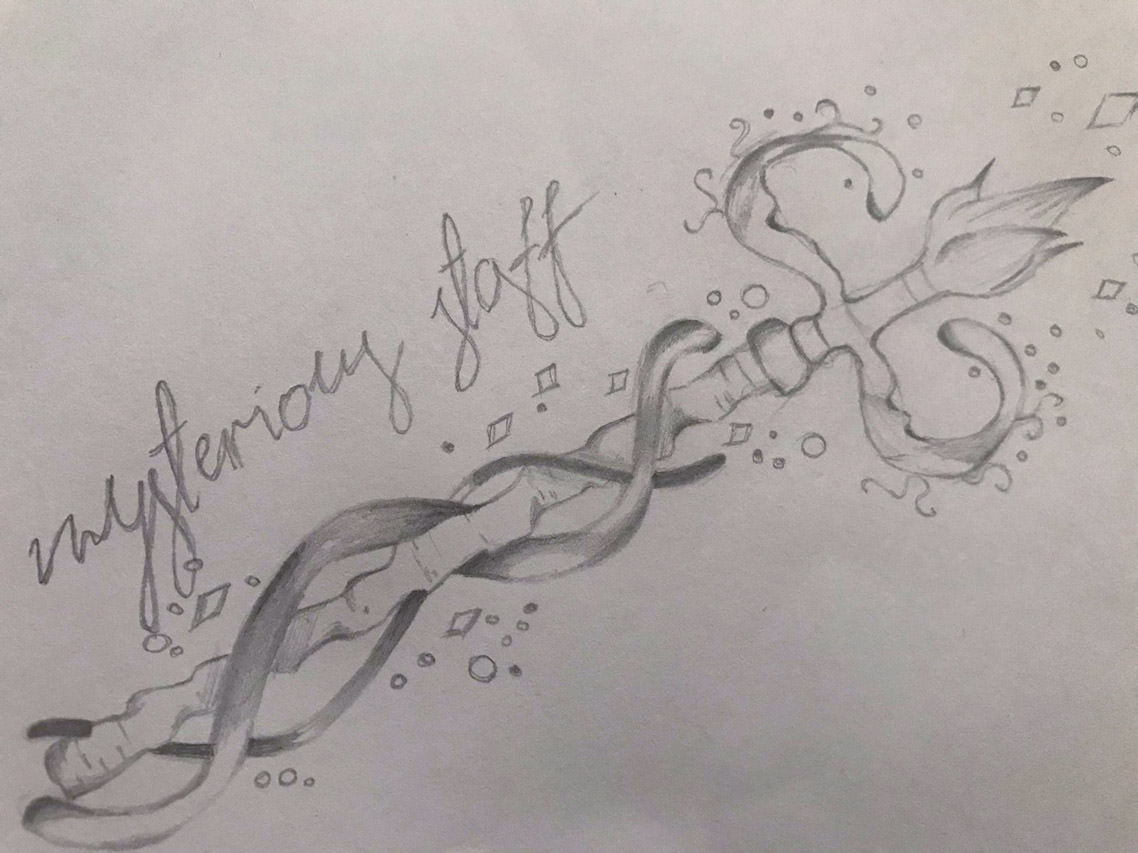 The greatest staff for bosshunters. However it might work in an inappropriate way. Awarded by TibiaBosses.com

Delcan was a farmer, who came from an impoverished family. He was known for having a good heart and he used to help a lot of people. After finishing his daily work, he always came to a Tavern to take a rest. One day, he sat next to the couple - Louie and Sandra. They were speaking about killing bosses and getting a lot of valuable items from them. After Delcan came back to home, he decided that hunting bosses might be actually a really interesting activity. He could get a lot of cash by selling rare items, so he would be able to help a lot of poor people. Delcan was a guy with a really big heart, in his life he always wanted to help everyone, especially poor kids because he came from an impoverished family and he wanted to prevent others, especially kids, from living in such a bad conditions.

After he woke up, he decided to speak with the most powerful mages in Edron Academy. Delcan asked them for a help with finding bosses. He promised them that he would split the whole loot from them between poor people. Mages were really interested in his idea, also they really liked him and they could always count on him whenever they needed any kind of help, so they decided to help him out. In one of the old books, they read about ''mysterious staff''. Such item worked like a radar for bosses. It gave a bright light each time the boss was about to spawn. Mages decided to create such staff for Delcan, but he had to get required components to power it up. He travelled for many weeks, all around the Tibia, to get all the components that were needed to create mysterious staff.

After gathering all required items, Delcan came back to the Edron Academy. Few days later the staff was ready to use.

For the next couple of months Delcan was killing most of the bosses across the Tibia land. Mages were really happy about that, because the Edron's inhibitants no longer suffered from lack of food.

However, Louie and Sandra, the couple that Delcan met in the Tavern, did not like the fact that Delcan used to kill most of the bosses. They knew about the mysterious staff that helped him with finding the bosses, so they decided to steal it from him. They called other bosshunters and set a trap for Delcan next to his favourite Tavern. They attacked Delcan from behind and stole the mysterious staff. Fortunately Delcan survived and ran straight to Edron Academy. He explained what have happened to the Mages. They were horribly angry that someone could set such a trap and steal such a powerful item. They decided to curse the staff by using black magic. From that time, the mysterious staff was shining in a really weird way and started to work like a bait for all the bosses. Louie and Sandra noticed that something is wrong, but it was already too late. All the bosses from all around the Tibia appeared next to them in less than few minutes. Louie and Sara were defeated.

Unfortunately none knows what happened with the mysterious staff. Mages decided to not make such a powerful item anymore. Delcan came back to his previous duties, he promised himself that he will never try to become bosshunter anymore. Rumours say that the staff was destroyed by bosses. However, people still believe that Mages from the Academy found the mysterious staff by using the black magic and then they put the staff in the safest place in Edron. None yet discovered where is such place. 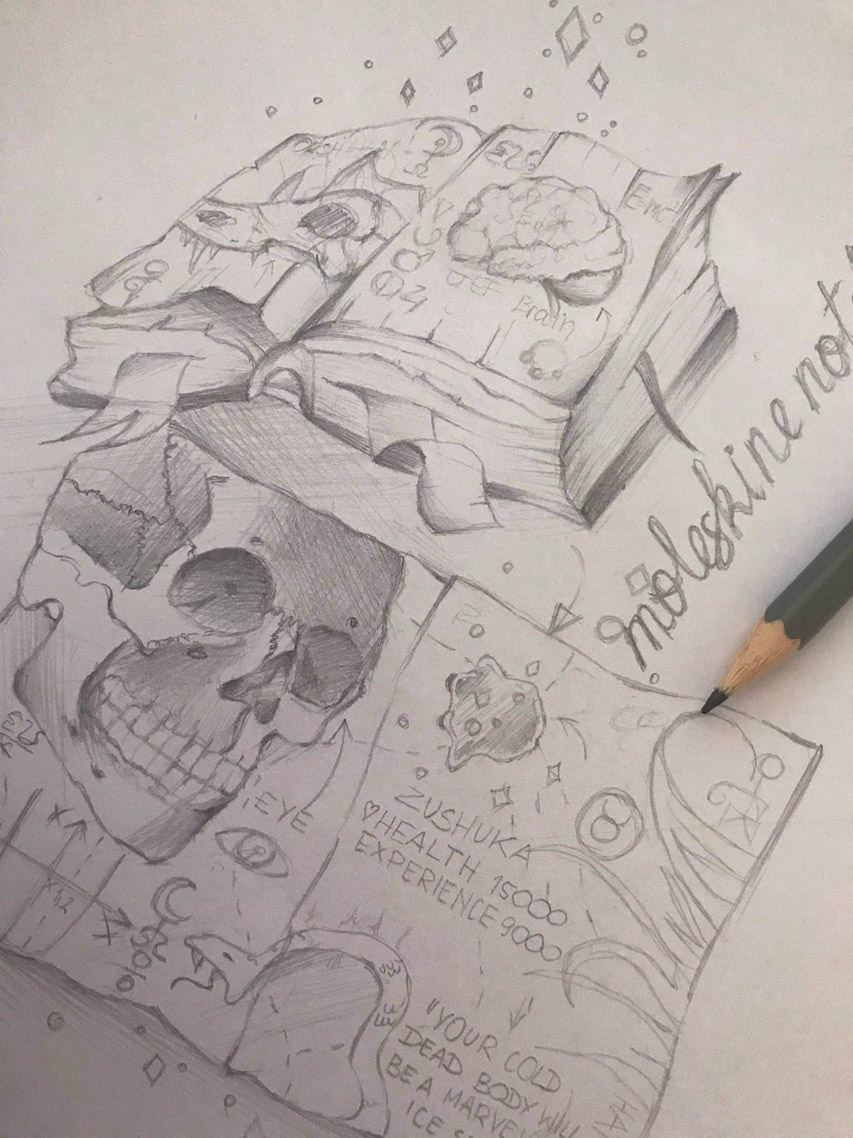 You see a Moleskin Notebook. It weights 21.00 oz. Contains the secrets of the most powerful creatures.

Necessary for Boss Hunters. Legend says it increases the possibility of meeting bosses.Awarded by TibiaBosses.com

Once upon a time, a guy called Finley was known for killing most of the bosses in Tibia. Many people call him as the Greatest Bosshunter that have ever lived on this land. He was known for keeping a journal with important informations about the bosses such as the place and the time of their appearance, their loot, weaknesses etc. Unfortunately Finley was too old and he did not have enough power to keep hunting bosses across the tibia lands. Before his death, he passed his journal to his son – Thijs.

Thijs promised his father to follow his path, when he was young he used to dream about being a better bosshunter than his dad. After reading his dad's journal, he noticed that his father never killed a boss that appeared pretty rarely in the coldest place in Tibia called Folda and his name was Yeti. He vowed to himself that his first journey would be that place. After few weeks, living in an igloo, he finally met the mysterious Yeti. After a close and even fight, Thijs finally won a battle over the snowy monster. After the battle he was seriously hurt and really exhausted. On his way to home, he encountered a camp with a thousands of frost trolls.

After that none ever saw Thijs. His friends tried to find him but they only found his cloths and a scrap of his father's journal. In this journal's fragment, the only information that they could read was the name of the boss – Yeti and the time that he was killed. People still have a hope to find his journal in the troll cave. However none yet discovered anything about what happened with Thijs and the journal.