1. Gaz'Haragoth is strongest and most difficult to kill creature in the game.
2. Boss Spawns every day at Server Save on top of the central mountain in Upper Roshamuul until killed for the first time. Once this happens, spawns as a raid in the Roshamuul Prison.
3. Before he appears, the following message is broadcast in white text to all players of the world he spawns in: "Gaz'haragoth will shatter your dreams in a barrage of nightmares!".
4. Gaz'Haragoth has special abilities announced by himself:
a) "Gaz'haragoth begins to channel DEATH AND DOOM into the area! RUN!" - Five seconds after being announced, Gaz'haragoth will cast his ultimate attack. This attack is insanely strong and will kill almost anyone. When he casts it, there will be another announcement: "Gaz'haragoth calls down: DEATH AND DOOM!"
b) "Chill out!" - When announced, Gaz'haragoth casts his Ice UE which deals 1000 damage.
c) "Minions! Follow my call!" - Announced every time he is hit if he is not at his summon capacity. When he announces this, Gaz'haragoth will attempt to summon up to 2 Minions of Gaz'haragoth. It will fail if Gaz'haragoth has no room to summon.
d) Gaz'haragoth beginns to draw on the nightmares to HEAL himself! - In about 8 seconds Gaz'haragoth will heal himself for 300,000. When he does, another message is announced: "Gaz'haragoth HEALS himself!".
5. Care must be taken when walking in Gaz'haragoth's lair as the minions turn into Strange Vortices which lead to Gaz'haragoth's Nightmare. Once teleported here a player can choose to fight the Nightmares of Gaz'haragoth or escape through another portal to the south.
6. There is roumour that may be another way to kill this boss because servers with low population will struggle to defeat him before he heals. In particular, one of the announcements seem to hint that the nightmares can be killed to prevent his heal: "Gaz'haragoth beginns to draw on the nightmares to HEAL himself!".
7. Boss is more frequently killed on PvP servers, despite the fact, that Non- PvP servers are more populated. The reason of that is blocking this boss require trap by a lot of wild growths and magic walls. Only one bad manner player can destroy those objects on Non- Pvp Server.
8. Achievement "Prison Break" is reward for taking part in killing this boss.
9. Around 80 shooters is required to kill Gaz'Haragoth.
10. Boss was firstly slain on Nerana.
11. When you surround this boss with 8 blockers, he will cot cast his "DEATH AND DOOM!" attack . 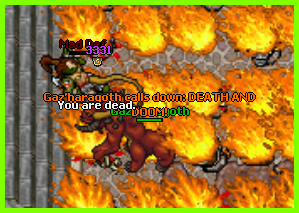