1. Before he appears, three messages are broadcast in white text to all players on that world: "The seals on Ferumbras old cidatel are glowing. Prepare for HIS return mortals." , "Ferumbras return is at hand. The Edron Academy calls for Heroes to fight that evil." , "Ferumbras has returned to his citadel once more. Stop him before its too late.".
2. You must ask for a permission to Zoltan (Edron) to access the Ferumbras Citadel.
3. Ferumbras was first sighted on Eternia on August 21th 2006, but a bug prevented players from reaching him. He appeared there again after two weeks when the bug had been fixed.
4. There are 2 Magic Pillars at his room, which can summon up to 3 Demons each.
5. This is most popular boss in Tibia. Ask NPCs about "Ferumbras". Many of them have something to tell about him.
6. On Refugia on March, 21st 2011, Spawning of Ferumbras was blocked by standing one or more players on every tile of the northern part of the room he spawns on. This bug is probably fixed now.
7. After he was firstly slain, he produced several oddly-charged runes, including a Sudden Death rune with 0 charges and a Poison Bomb rune with over 30 charges.
8. Ferumbras was once controlled by Durin, one of the members of the CipSoft. He had many skills, such as summoning Warlocks, or runes on charges 99x. Today it is a monster, like all and occurs during the raids.
9. Among many rares, he leaves behind a Ferumbras Hat, which is needed to get the second addon to the Mage and Summonner outfit.
10. Ferumbras was removed from society and banished to his citadel by the mages at the Edron academy. He has a massive arsenal of spells to torture and heal.
11. The Ferumbras's staff is always facing the same angle, which means that you will always see the format of "F" on it, no matter the direction he is looking.
12. If Ferumbras were a player, he would have the incredible level 6971 with 208,925 mana points. And if a player wants to match his attack power to the powerful wizard, he would have to reach the magic level 719.
13. Ferumbras was an evil sorcerer who once instilled fear into the heart of Thaians many years ago. Summoning demons and warlocks, he attacked Thais twice during the span of his life. After his second attack, he was finally killed and most assumed him to be gone for good. But his wrath was brought down when he returned some time later and found his daughter, Fortinbrae, had been killed and her soul trapped by the brave knights who had slain her, in the Plains of Havoc temple. Ferumbras traveled there to recapture his daughter's soul, but he was defeated again and disappeared. There are many rumors about his current whereabouts.
14. High in the Ivory Towers in Edron, home to some of the most advanced masters of magic around the Tibia, there is a simple black frame. The message written on it arouses both fear and envy in the heart of every magical master on earth. He says: The first and only magic Armageddon. Sorry, we are looking for a new teacher at the time. This was taught only by the great and famous magician Ferumbras, who was expelled from the academy of Edron because of his destructive behavior. This spell is like Ultimate Explosion, but it looks like a big burst of energy rays, and fills the entire game screen. The average damage dealt when Ferumbras uses this spell is usually between 600 and 950. No one in Tibia know if that magic can be taught, but there are numerous indications that lead us to the conclusion that perhaps she may never be learned. Many players are betting that it can be purchased in a future update.
15. There is not much know about the klabautermen. Marcus says that Ferumbras is the father of all klabautermen if you talk with him. There is also a book in a bookshelf on Nargor, the pirate island, that looks like an atlas and contains the following information: The klabautermen are a race of impish, mischievous beings that live on ships. Using invisibility and other magic, they remain unseen most of the time. But be warned, if you antagonise the klabauterman of a ship, his harmless pranks will turn dangerous. In general it is a smart move to keep your klabauterman happy with little presents and a lot of rum.
16. Ferumbras is grandson of Goshnar - the infamous necromant king.
17. Player with nick "Ferumbras" exists on Antica. 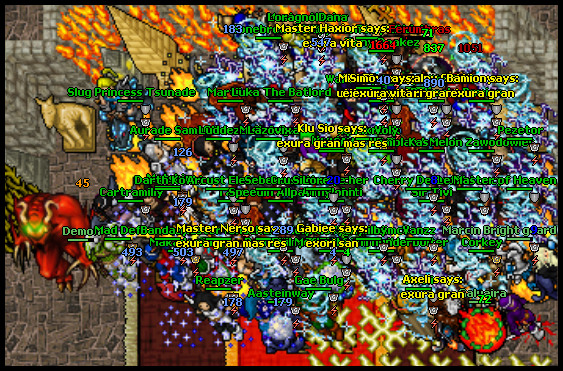