1. To access this boss, the player needs to be roped by him. It is possible to be roped by standing in correct place (second sqm to left from frozen mage), and just wait.
2. It is possible to know that boss appeared while being under him by seeing voices of monks (or his).
3. If someone has killed this boss, but leaves the monks, the player can still be roped into his cave.
4. Unfortunately, it is no possible to log out in boss cave.
5. Man in the Cave is weaker than his summon - Monk.
6. Fur Cap is a rare item dropped by this boss. This item is worth tracking on the market. Sometimes low level players can meet this boss while hunting Ice Golems, loot Fur Cap and put it on the market for a low price!
7. The Man in the Cave was started from a post on the Tibia Forums in August 2006 by a player on Luminera named Frack'Heart (now deleted). Apparently Frack'Heart was complaining about a player in the Kazordoon Dwarf Mines who was roping creatures. His English skills were far from advanced, therefore the post was hard to understand. Post became famous so much, that Cipsoft actually put Man in the Cave into Tibia.

Man in The Cave

Please choose input type for columns that you want to edit 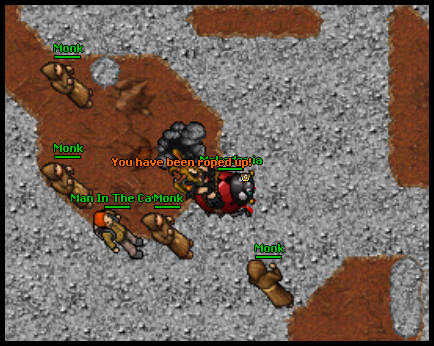 2 Responses to "Man in the Cave"

Please confirm deletion. There is no undo!